In 1972 InterRail was introduced, a rail pass that allowed young people to travel freely throughout Europe. It matched perfectly with the unbound youth culture of the early seventies. Millions of Europeans have used it since. For many, InterRail was a rite de passage to adulthood, just as the Grand Tour once was for the wealthy.

Sleeping in trains and stations allowed youths to travel as long as possible for as little money as possible. The borderless travel and mutual contacts among Interrailers have certainly contributed to European unity. On posters and other promotional materials the sense of freedom was symbolized by backpacks and guitars.

InterRail started in the summer of 1972 as a one-time offer on the occasion of the 50th anniversary of the UIC International Union of Railways. At £ 27.50 or DM 235 young people up to 21 years old could travel 21 countries for one month. About 100,000 InterRail passes were sold. Based on this success and many requests afterwards the UIC decided to make the offer permanent.

The first InterRail poster was created by Guy Georget (1911-1992), a French designer who regularly worked for the SNCF and Air France. It showed a young couple wearing colorful clothing and a guitar, an attribute that would become iconic in InterRail advertising, just as a backpack would. On the first poster, however, suitcases were still depicted instead.

In 1973 the French railway magazine La Vie du Rail published a travel report by 19-year-old Michel Braun, a student who went on an InterRail tour the previous year. It was titled Free ride for youngsters from the Peloponnese to the Northern Cape. However, Braun did not go that far north – he traversed Italy, Yugoslavia, Greece, Hungary, Austria, Switzerland, both Germanys and Poland. In Hungary and Poland he stayed at host families. In some countries trains were still steam powered.

At the station my eye is caught by a poster with bold letters: Inter-Rail, Europe for youths. Jacques had told me about it in the university cafeteria last week… Apparantly you can travel all over Europe at a low fare... One week later I depart. My parents can barely conceal their concern because I am traveling alone. You have to be on your own to really get to know a country and its people. Fortunately I establish contact easily, and what could be a better setting to start a conservation than the intimacy of a compartment? The train starts, we are leaving France.

My return journey from Poland… via West Berlin, through the Federal Republic, along the Rhine… only a few kilometers from my homeland. After a month's absence I long for home. But let's look back for a moment on this amazing journey that the European railways enabled. Greece, Poland… countries I could only dream of are now memories engraved in my heart, thanks to the Inter-Rail pass. As for the young people who read this, do not despair: Inter-Rail is available again for the summer of 1973. So when do you depart?

In 1976 the French illustrator C. Moreno designed an InterRail poster that looked like a comic strip. Cheerful youths with guitars and backpacks were depicted in the typical colors of the decade. The French railways altered the poster for use in all participating countries, and the illustrations were reused in leaflets and brochures of several European railway companies.

In 1976 the InterRail age limit was raised to 23 years — many increases would follow, not only in age but also in price. In addition, InterRail became available all year round and Morocco joined the club, expanding the reach beyond the borders of Europe. Poland and the GDR on the other hand, which had participated in the early years, pulled out.

Because the UIC was a neutral organization, Hungary, Romania and Yugoslavia decided to join InterRail, despite the Cold War. The East Bloc countries participated passively though: Interrailers were welcome, but no passes were sold to their own residents. Yet InterRail did enable exchanges between East and West, notwithstanding strict border controls.

Lithographic posters with hand-made illustrations were increasingly replaced by photographic posters in offset printing. In 1978 the Deutsch Bundesbahn's Werbeambt (advertising agency) created an iconic photo of a backpack with a pair of jeans underneath, an InterRail pass in a back pocket. It probably referred to a well-known Levi's poster of the period that only suggested a back pocket with dashed lines on a naked buttock. The poster text indicated that the maximum InterRail age was now 26.

The German railways provided localized versions of the backpack poster to almost all European railway companies, but the Norwegian State Railways (NSB) launched their own campaign. Instead of the studio photo of one detail, the Norwegians selected more real-life photos of interraillers at stations. Again, however, backpacks were a recurring motif. The slogan was: InterRail is better than hitchhiking ... and more fun too.

One month across all of Europe by rail if you are under 26. When you are young and adventurous holiday kilometers do not count. Especially when you travel freely and comfortably by train and stop wherever you like. You are free to choose your holiday period and your voyage of discovery starts on the day you indicate…

When the big day has arrived you'll leave with the certainty that all borders are open to you and even the sea cannot stop you — because you also enjoy a lot of discounts on shipping services, including the sea lines to and between the British Isles.

Despite changes in youth culture InterRail remained popular in the next decade and even peaked at 300,000 passes in 1985. From that year onwards several ferry services were also free for Interrailers, including the popular link from Italian Brindisi to Greece. With Turkey as a new member, part of the Middle East was added to the InterRail map.

The backpack and back pocket photo was recognizable, but rather impersonal due to the lack of faces. In the early 1980s several youngsters were portrayed in the studio against a white backdrop, with a small flag on top of their luggage to show where they were from or were going to. Several railway companies used these photos in their own brochures and posters.

Although photos prevailed, illustrated InterRail posters were created by Vic Callaert (1927) and Paul Funken (1932), two long-time designers at the Belgian railways. In 1983 Funken drew a travel bag with a zipper doubling as rails for the brand-new French TGV train, and a luggage tag with the flags of the 21 countries. These posters were also handed out in small size as stickers. A few years later Vic Callaert conceived a graphically designed poster that was used all over Europe: a branching-out InterRail tree with 22 'leaves' (Turkey included).

The end of the Soviet bloc led to further expansion of the InterRail network. 29 countries participated in 1994, including Poland, the Czech Republic, Slovakia, Bulgaria and Romania. On that occasion seven separate zones were introduced, from Zone A (UK and Ireland) to H (Bulgaria, Romania and former Yugoslavia). This change reduced the price, but the range was limited and the pass became more complicated.

In 1998 InterRail became available to all ages, although 26-plus passes were more expensive. For the first time InterRail was no longer a specific youth offer, but the advertising was not significantly adjusted. The 'adventurous' adult audience was addressed by youth-targeted ads as well, and partly consisted of former Interrailers who could now relive their youth experiences.

Leave the baggage behind

The Interrail logo with bold round letters was replaced by a less powerful word mark. In the nineties the advertising varied per country. The Dutch Railways completely dropped the logo on their Taste the Freedom poster. British Railways published magazine ads with the ambiguous slogan Leave the baggage behind. According to the text, life was not about exams but about Paris, Barcelona, Prague and Amsterdam.

To compete with the growth in air traffic a first-class pass was introduced. InterRail was not just for backpackers anymore. The backpack also dwindled as a sign of recognition; interactions between interraillers diminished with the advent of the Internet and smartphones. Travel became also less free because of mandatory reservations and surcharges for high-speed trains and night trains. Trains no longer doubled as free hotels.

In 2007 the UIC handed over distribution and marketing to the Eurail Group in Utrecht, which also issues the Eurail Pass, a comparable pass for non-Europeans. The separate zones were abolished again, while the InterRail One Country Pass was introduced as a successor to Euro Domino. Morocco and Russia pulled out. Under the motto Free to explore Europe the InterRail Global Pass now offers travel in 30 countries on 250,000 kilometers of railway line.

A road trip without a driver's license — is that possible? Of course. Or would you like to explore Europe with your whole family, but without traffic jams, stress and fixed plans? That's possible too. And what if you're not that young anymore? Well… once adventurous, always adventurous. The unknown attracts all ages, only traveling many countries is such a hassle, right? Hop on quickly, choose the easy way and travel with InterRail. You go wherever you want, stay wherever you like. Let your heart guide you: that's what real luxury is.

From Norway to France, from Spain to Bulgaria — where do you want to go? With the Global Pass in your pocket you can travel unlimited in 30 countries. And you set the itinerary all by yourself: Monday the Côte d'Azur, Tuesday Firenze, Friday Prague? Or maybe first experience culture in Greece, and then enjoy chocolate and snow in Switzerland? The InterRail Global Pass means 100% freedom. It's fantastic!

Around the turn of the century freecards became popular: free postcards with advertisements, distributed in restaurants and nightspots. InterRail was promoted in this way in Denmark (Go-card), Belgium (Boomerang) and Italy (Promocard), for example. The Belgian card compared InterRail to a pinball game with continuous high scores, the Danish one deemed all other transport options fake (F**k fly. Drop bus.) while the Italian card advised to go where your heart leads you. 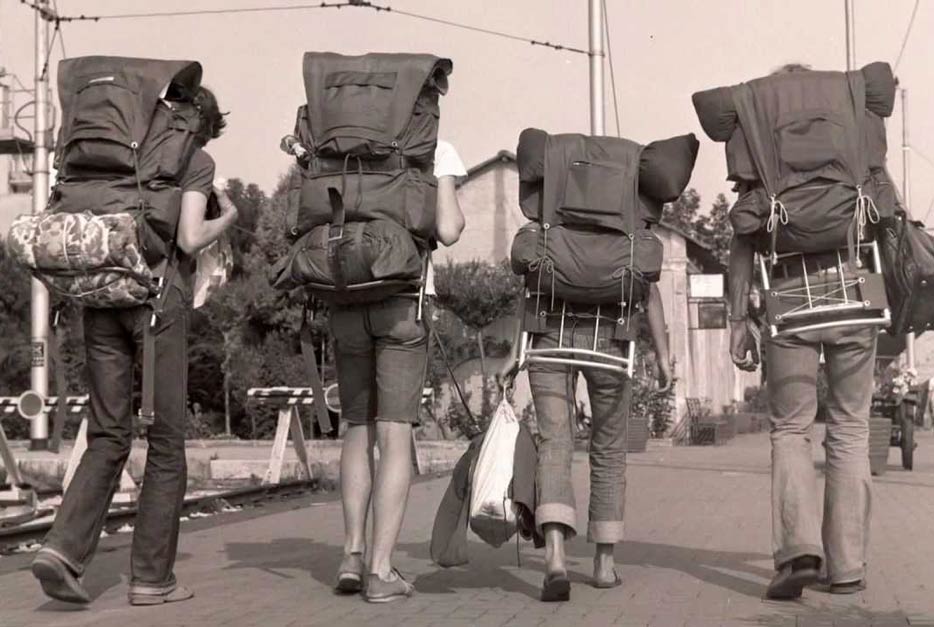 248,000 passengers traveled with InterRail in 2011, of whom 80% were young people. Germany, France and Italy were the three most popular countries. In 2012 the 40th anniversary was celebrated with a free party on the Superfast ferry from Ancona to Patras with a swimming pool and DJs. An initiative by the European Parliament to offer all 18-year-olds a free InterRail pass to promote European unity was rejected by the European Commission in 2017 because of the price of 1.5 billion euros.