Switzerland was the third country LIFE photographer Jack Birns entered on the Simplon Orient Express in 1950. After the border village of Vallorbe the journey continued along Lake Geneva and through the Rhone Valley.

Birns photographed famous sites such as the Chillon Castle and the ruins of Sion. He and his companion Roy Rowan were in a holiday mood and made several excursions.

After Brig the train entered the Simplon tunnel, at the time the world's longest railway tunnel after which the Simplon Orient Express is named. On the other side Italy was waiting.

At Lausanne station, Jack Birns took a photo of a poster designed in 1947 by Walter Spinner.

It advertised the Simplon Orient Express as the most direct and most picturesque international train service. Switzerland and the Simplon line were displayed disproportionately large.

Birns may have also seen a poster by Emil Cardinaux depicting the Chillon Castle on Lake Geneva.

This 1928 poster was re-released in 1949 with new typography and text.

An electric locomotive passing Chillon Castle is an iconic image of the Simplon line, as the entire stretch from the French border into northern Italy is called.

In 1950 electric trains were still special: from London to Istanbul, just a few sections outside Switzerland were electrificated in France and Italy.

The castle itself dates back to the 13th century and was once the residence of the Counts of Savoy. It is situated at a strategic location on Lake Geneva. For that reason an almost invisible new fortress was built near the castle during World War II.

As a former war reporter, Birns was interested in Swiss defense. He photographed concrete anti-tank barriers at Chillon and in the Rhone Valley near Evionnaz. They are called dragon's teeth or Toblerones because they look like the eponymous Swiss chocolate bar.

The toblerones date from World War II when Switzerland maintained an armed neutrality.

During the Cold War the barriers remained important when Switzerland fortified its defenses for fear of communist domination.

Just as at Chillon, Jack Birns interrupted his main journey to visit and photograph the ruins of Sion in the Rhone Valley. The 12th century Valère basilica and the 13th century Tourbillon castle are situated on two remarkable rock hills. Sion was the capital of the county and later of the canton of Valais.

The railway station of Sion was built in 1873 when the western Simplon line was already under construction. After the opening of the Simplon tunnel in 1906 it became an international station where one could take the train to Milan and beyond. The station was drastically renewed in 1960.

Brig was the only place where the Simplon Orient Express traversed German-speaking territory. The small Alpine town became an international railway hub because of the Simplon line.

On May 10, 1906 both the Simplon tunnel and the new Brig railway station where officially inaugurated by the Italian king Victor Emmanuel III and the Swiss federal president Ludwig Forrer.

In 1878 the western Simplon line connected Brig to Lausanne, Geneva and Paris.

In 1913 the Bern-Lötschberg-Simplon railway linked Brig to the north.

Just after Brig the train plunges into the Simplon tunnel, with nearly 20 kilometers the world's longest railway tunnel at the time. The digging of the first tunnel tube started in 1898 and was completed in 1905. Thousands of Italian workers contributed to the construction, of whom 67 did not survive.

The tunnel was electrificated shortly after the opening and in 1921 a second tunnel tube was taken into operation.

In 1919, the Simplon tunnel made a new southern route for the Orient Express possible. As agreed in the Treaty of Versailles the train had to avoid pro-German territory. This new Simplon Orient Express became the main connection to the Balkans and Turkey.

Jack Birns and his companion not only took the train through the Simplon tunnel, but also made ​​a car trip over the superjacent Simplon Pass. This important route between Switzerland and Italy is over 42 kilometers long and has its highest point at 2005 meters.

It was once a harsh journey, but the road was greatly improved by Napoleon. At that time the traversal was considered a spectacular achievement, which once again applied to the Simplon tunnel 100 years later.

Jack Birns made ​​his journey together with LIFE correspondent Roy Rowan (1920).
They had joined forces before as war reporters in Shanghai. Later on, both published a book about this enervating period.

In 1950 Rowan was stationed in Rome together with Birns. He can be seen on several photos taken during the trip. Rowan also took pictures of Jack Birns. Some photos depicting both men where made ​​by others or with a self timer.

Until 1951, a stagecoach or sleigh ran over the Simplon Pass from November to June to transport passengers, mail and supplies to the villages on the pass. The difference with the train in the Simplon tunnel was huge: a journey of 20 minutes versus 10 hours over the snow-filled pass.

Jack Birns was intrigued by the coach and the coachman he photographed in the border village of Gondo. Six months later he returned to make a separate photo report on the Simplon coach, which shortly afterwards was replaced by a mail bus.

Thanks to Birns' LIFE article of January 29, 1951 we know the name of the 60-year-old coachman: Edouard Theiler.

During their car trip over the Simplon Pass, Birns and Rowan also took a look on the Italian side. At Iselle, the Simplon railway line surfaces again after 20 kilometers below-ground, but not for long.

After several short tunnels it enters the three-kilometer Galleria Elicoidale or spiral tunnel at Varzo. It actually consists of two tunnels with a viaduct in between, which was photographed by Jack Birns.

From there the line continues to Domodossola and Milan, the route that Birns and Rowan would travel shortly thereafter. 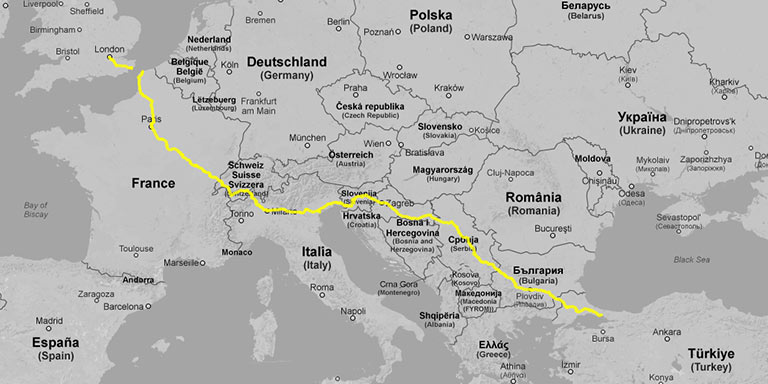